We embarked on this crusade for a number of reasons including:

1.) To bring more bright and strategic minded players into the PvP community. Also to provide new players with tips, training, gear, and pets they need to be successful.

3.) To experiment with different forms of PvP and modifications of already existing forms.

4.) To give clans a set of rules to agree on, regular times when they can meet up, and help clan PvP thrive in general.

That's what we're all about.

By making this group I am not saying that I am one of the best players in Pirate101. I spreed my extremely limited time and resource between all my pirates, my YouTube channel, managing this clan, and school and life in general. This prevents me from being one of the bests, but I am pretty good. I made this clan for the reasons stated above; there is no hidden statement of "I'm better than you."

1.) Scamming other players inside or outside of this group can get you kicked regardless of your skill or commitment.

2.) Always show respect to the higher ups. If any of the members are abusing their position, contact me or another higher up about it so that we can deal with it.

3.) You must contribute to this group in some way. Members who show little commitment, will be placed on the on the inactive members list and other people will be able to take their place. We will attempt to notify members before we put them on this list. People on the list can try out for their positions again if they wish to come back.

4.) Every full-fledged player on the roster will be knighted and given the title of "Sir". 3 months after receiving knighthood, each knight will be required to have his own squire whom he will train to be an effective pirate in the PvP community. If a squire wins first or second place in the spiral showdown, they will be offered a knighthood.

5.) Harassing, bullying, and disrespect toward other pirates inside or out side of our clan may be reason enough for kicking members from this group. We will try and give everyone a warning, but repeated offenses will certainly be dealt with.

6.) Every knight or squire on our group must care about this group enough to read the full current description page and any other information on that same page.

Showing unclanworthy behavior can earn someone a spot on our excommunication list. Breaking rules 1,2,5, and 7 on our code of chivalry can earn someone a spot on this list. This is so that we can warn clans about unclanworthy players, and recommend those who are clan worthy. The players on this list have gone to some extremes and are not good to have on any clan. This list counts for all of the Pirates that player owns. The current players on this list are as follows:

Caleb ( This player is known to steal other peoples accounts so he might be playing someone else's account. )

Chief Craftsman:
Description: Manages and helps with the media aspects of the clan. Basically acts as the leader of the clan's YouTube network.

Chancellor:
Description: Receives and manages complaints regarding anything related to our group or any of it's members. They also report to the clan master or the Seneschal in certain situations.

Court Jester: Jessica
Description: One especially eccentric player that represents the group and entertains people with their odd behavior, usually an Avery noob.

Friends of the order:
Description: People who make donations to this group.

If you are already a well known player and you wish to join automatically as a knight, The clan leaders in our group will vote on weather they think you are worthy of such a
position. If you are not skilled enough or we simply don't know enough about you, then you are not likely to gain an auto knighthood and will have to join as a squire and win 1st or 2nd place in a Squire Showdown to be knighted. If 2 thirds of our clan leaders vote affirmative as to your knighthood, you will be knighted.

Squire Showdown:
People who want to join our group can join if they can get one of the members ( knights ) to take them as their squire. They can become a full fledged member by competing in one of our squire showdown tournaments that we will be hosting every month. If they win 1st or 2nd, they will be given a knighthood, and we will have a knighting ceremony at one of our members houses. 3rd place will be given name recognition. Knights will be given a certificate of knighthood signed by the clan master. We will have a list of all the players that have been knighted on our website.

At the beginning of every week ( Starting on Friday ) the marshal will assign the matches. During that week each squire participating will be required to meet up with whoever they got matched up against and fight them. Best out of 3 fights wins the round, and the winner will continue on to the next round.

Elimination rounds: These will be fought within the 1st week of every month.

Semifinals: Theses will be fought within the 2nd week of every month.

Finals: These will be fought within the 3rd week of every month.

Awarding and Ceremony: This will take place whenever it is most convenient and when all necessary participants can make it.

The rules for Squire Showdown include:

5.) If there is a disagreement to the outcome of a match, then screen shots might be required to settled the matter. If neither player has screen shots or some other form of evidence, they will be disqualified for the rest of the the tourney. They will be free to participate in future tourneys, however. If there is proof that someone lied about the outcome of a match, they will be kicked from our clan.

This is a list of player who have been knighted are in good standing with our clan policies. Joining another clan or simply quitting it will not take a player off this list. The players are as follows:

( no players have been added to this list yet. )
​

When a squire gets knighted, he will receive a certificate of knighthood. This can be shown to clans and individual players as a credential for if they want to join another clan or if they just want to say that they are good at PvP.


Here is an example of what these certificates look like: 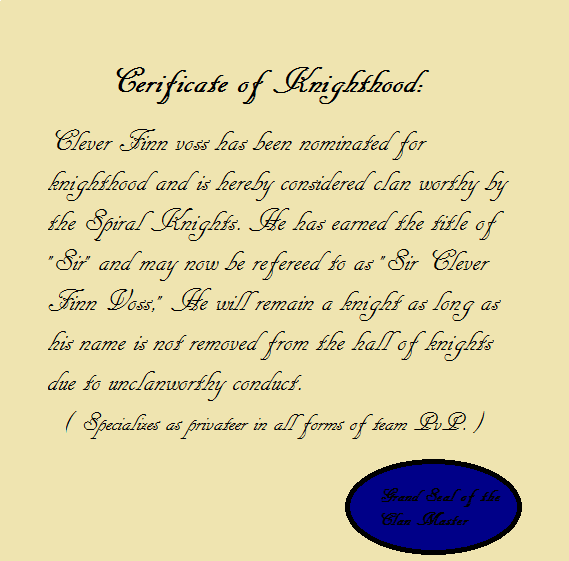 Our Rules for most of our 3v3 and 4v4 matches

Unless we agree on other rules, these will be the rules we will go by if you wish to challenge any of our clans:
( If you wish to fight with different rules you have to give us a one month's notice before the match )

2.) Only 2 companions from packs on each team.

This is a form of PvP which our clans will participate in with other clans and other players. We invented it so I'm not sure how many other clans use it. Here is how it works:


The hosting clan will select someone to represent each class. Each selected representative from the hosting clan will find a server to stay on during the competition and the other clan will rotate between those servers with their class representatives until each class from both clans have fought each other once. After completing all of the matches, The score will be determined by the total number of wins for each clan. The clan with the most wins will be considered the winner of the competition.

The rules for class warfare include:

3.) No unite may have 3 or more of the following defense buffs when hidden: Valor's fortress, Valor's shield, Valor's armor, Triton's song, Kracken's lament, and Leviathan's call.


We will have 3 clan practices every week. Our current times for practice are Friday, Saturday, and Sunday at 4:00-6:00 pm. CST. A clan must try and make it to one of these practices at least once a week. If unable to attend any of these for a certain length of time, we will want to be informed ahead of time. If none of these times are suited for your clan, you can talk to us and we might be able to work something out for you.

At the start of every practice each player will go the our clan meeting realm ( Frogfather. ) The Marshal ( or sometimes another staff members ) will then give them instructions which they must follow. He will tell you which realm to go to and what you are expected to do when they get there. If you refuse to cooperate with them, you are likely to be excommunicated from our clan.

It is a requirement that all players participating in clan practice or clan matches play by our current rules for that type of PvP.

That is how our PvP team is run. It is likely to change in the future though.


1.) Members of this convention must agree to limit their clan rosters to a maximum of 10 player. This prevents a monopoly where one clan gets all of the good players. Small clans tend to work better in general anyway, and also since there are not as many players anymore, clans would die if one clan were to take all or most of the good players in the PvP community.

2.) We will also do what is necessary to keep other clans outside of our convention from forming a monopoly.

For the 1st 3 Saturdays of every month, our members will meet in the morphing tent at 6:00-8:00 pm. CST. During this times members are encouraged to morph freely with other members in order to improve our clans as a whole. Members can also meet up at other times to morph, but this is when we will be morphing together as a group.


If you have a pet that you are willing to morph with any of our members, you can register it by giving our Under-Marshal the following information:


If you want to farm with members other members, you can contact our Under-Marshal the following information:

We hope to schedule farming parties if there are enough members farming a certain source.


( Meet one of our members in game if you wish to join. )


( More work will be done on this page in the future. )